I made my last visit to Zealandia on a fine late-autumn day. Recent storms had drenched the valley, and the streams feeding into the reservoir ran high and fast. My path took me along the same route that I had wandered on my first day here four months ago – past the takahe, still grazing on the bright green grass, past the shags, which will supposedly continue to nest and raise young throughout the winter, along the boardwalk through the dense bush, and around the lake. 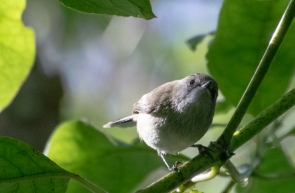 Saddleback calls burst out of nowhere, pairs feasting acrobatically along the rata vines and totara trunks.  A single grey warbler darted in and out of the foliage, while a flock of silvereyes landed in a cabbage tree, noisily checked it out, and took off for better foraging.  A tui tried to scare some young kaka out of its tree with an impressive display. 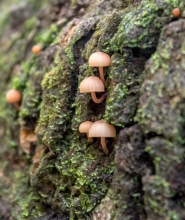 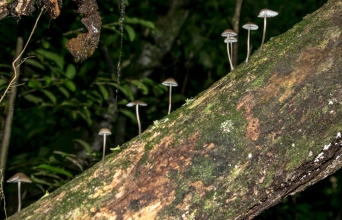 Fungi were loving the wet, cool conditions, popping up and gleaming in diverse shapes and colors. I noted with both pleasure and regret that all of this seemed so familiar now, sights that I enjoyed but that didn’t constantly stop me in my tracks any more to puzzle over.

When I finally paused to take a picture, a bold robin with fancy leg bands hopped right up and onto my boot, then flew off down the path.  I followed it and soon came upon a woman holding a clipboard, intently watching a small box lying in the middle of the path next to a digital scale.  The robin stood a short distance from the box, then hopped toward it.  I stopped to watch and photograph, while the woman whispered to me that she would be finished in just a moment, and continued to focus on the bird and box. The robin hopped over to the box, which had three covered compartments, and after using its feet to move the lids, much as it would move leaf litter, managed to open one of the compartments which contained a mealworm.  It flew off with the mealworm, then returned to the box. 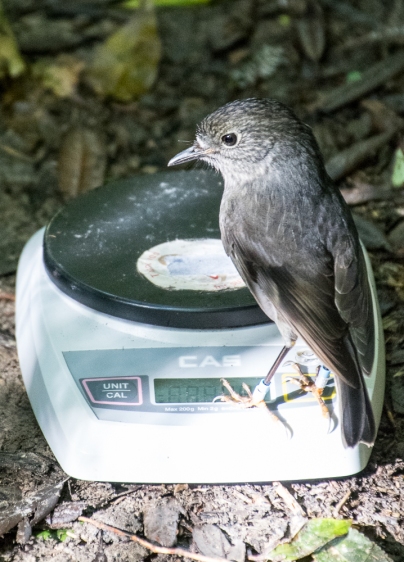 By this time, I was bursting with questions and the woman, whose name was Annette, had explained to me that she was helping to conduct research on North Island robin behavior.  As the only food-caching passerine (perching bird) species in New Zealand, robins exhibit behaviors that indicate an intelligence structure similar to that of humans. The robin I’d just observed – a juvenile – was one of twenty who had already been trained to search for worms in these multi-compartment boxes, and to jump on and off the scale.  The fact that he had opened the box with his feet (a more random motion than pinpointing and opening one specific compartment with his bill) disqualified that particular result. “But in time, he will learn,” said Annette. “You see how he is still a bit clumsy about getting onto the scale.” The little robin was scrambling around, trying out different poses on the scale to see which would result in a reward.  When he finally had both his feet properly on the scale, he was given a mealworm, which he promptly ate. “You’ll see that he will cache some and eat some at this stage,” explained Annette.  “In spring, when it is breeding season, he will likely form a pair-bond and will feed his mate at the nest.  But during the non-breeding season, he is learning to store up extra food.” Sure enough, the next worm the robin found was promptly carried to a dead limb and stuffed down into a small crack.

I left Zealandia thinking about how incredibly lucky I have been to witness the creatures whose populations have been allowed to recover here. North Island robins only thrive where they have complete protection from predators. Females are especially susceptible to predation, as they incubate the eggs and stay with nestlings. Fifteen years ago they were extinct in Wellington, and then 76 birds from an offshore sanctuary island were released into Zealandia. The population is now quite stable within the sanctuary, and in the immediate “halo” area nearby.  The tieke/saddleback, who faced imminent complete extinction not so long ago, are thriving here.  And the kaka, that loud, iconic comeback-bird, paid a visit yesterday to my backyard to feast on the camellia flowers just outside my window.  It’s hard to imagine where else I could have had a better front row view of such a dramatic turn-around. This is the true wonder that I’ve been privileged to witness: the ongoing fulfilment of a vision for restored biodiversity.