from coiled mouthparts to pinchers,

wings of lace to those with eyes,

legs for jumping, and legs for skimming the water, 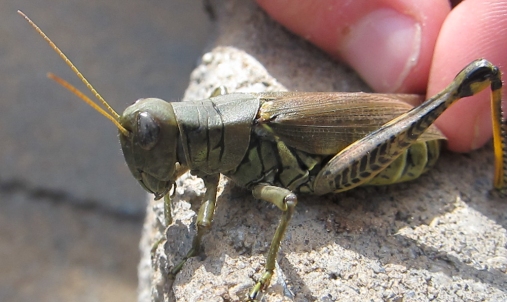 and antennae from feathered to beaded, long and short.

What’s been especially gratifying this spring as the younger kids have studied insects is how they have applied their knowledge of human skeletal parts – our winter unit – in this new arena. Eyes light up when they see that an insect, even with all its differences, can have a mandible, femur, and tibia – all words that they learned studying vertebrate anatomy.  Creatures that appeared completely alien now seem more familiar.

To further personalize these concepts, students designed and built their own bugs. From the basic insect rules, fantastically diverse forms and adaptations emerged, along with stories describing the insects’ natural history.

Our classroom insects help to illustrate adaptations for particular functions, but they also help build empathy for the world of wild insects that we encounter outdoors. Many of the first encounters that people have with insects are unpleasant, leading to a lasting perception that all beings with more than four legs are pests. I was not much of a fan of insects myself until I began teaching science and realized that what bothered me was based on misunderstanding or unfamiliarity.  Scariness usually serves its purpose: deterring a potential predator. 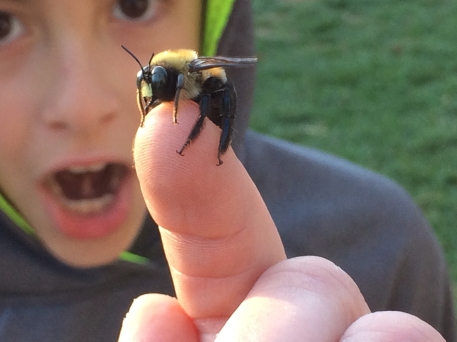 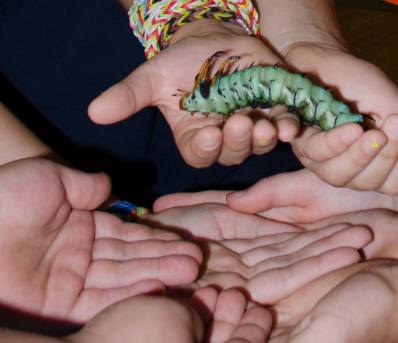 What looks like a long, pointed “stinger” on some crickets turns out to be the females’ ovipositor – a harmless tube that they insert into the soil to lay eggs. The hissing cockroaches appear to have gigantic heads and protruding eyes, but this is actually the prothorax, a plate that covers the tiny head. 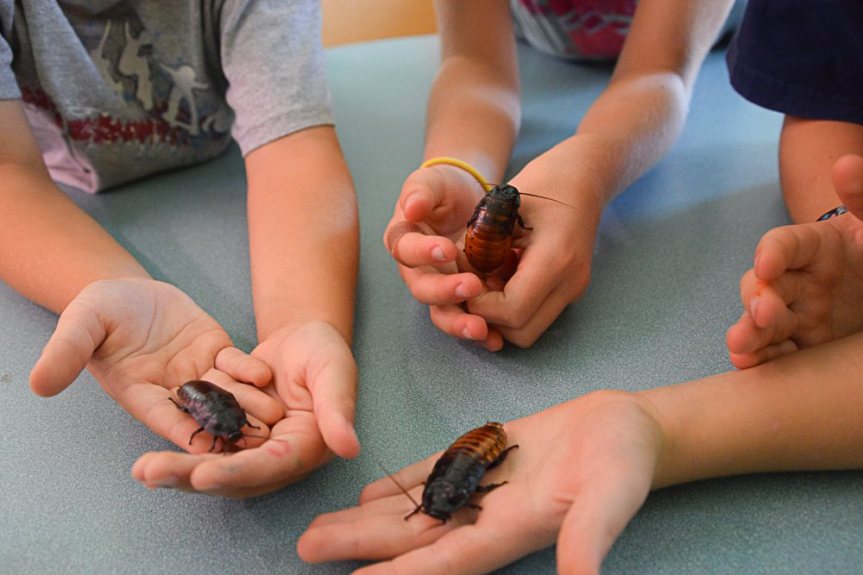 And that hissing noise? What better way to scare off the monster that has just picked it up? Mealworms are not worms at all, but the larvae of small, dark beetles that scurry about in their bin amid the rolled oats, potatoes, and pupae that are still undergoing metamorphosis. These insect ambassadors teach us how to look more closely at, behave more respectfully toward, and ask better questions about a group of animals that is both ubiquitous and often intentionally ignored.

Observing insects through their entire life cycle is particularly illuminating. We recently received silkworm eggs, and over the course of the week or so that it took for them to hatch, we talked about what the new baby caterpillars would need to grow.  Mulberry leaves are the only food they will eat, and there is one mulberry tree at Jemicy whose leaves the kids can reach. The day soon arrived when a single black caterpillar the size of this line _ came crawling out of its egg.

One child ran to get a leaf for it, we put it under a microscope to observe, and instantly it began to chew while the excited audience cheered. A day later, nearly all of the 100 eggs had hatched.

Within two days, we had to move the babies (which had doubled in size) into a much larger container. We considered: “If a one-day old caterpillar can eat one leaf in one day, how many leaves will we need to feed 100 growing caterpillars for a month?” This will be an interesting lesson in exponential consumption and growth. Fortunately for the silkworms, mulberry is an abundant invasive in this area.

Insects are both opportunistic and exquisitely adapted to very specific niches. One afternoon, I was called over to the big hollow tree trunk situated next to the playground. This trunk, the remains of a beloved oak named Erma, lies gracefully decomposing while serving as a popular climbing and hiding structure. The boy who called to me was jumping up and down with excitement: “There’s a gigantic beetle in the bark!” Sure enough, a shiny black abdomen protruded from a section of thick bark. We pried the bark up to find a magnificent Bess beetle working to dig herself deeper into the wood. When I picked her up, we could both hear her give a characteristic squeak of protest.

We examined her carefully, noting her short but sharp curved mandibles, the lines on her abdomen, her six strong jointed legs. We released her back under the bark, but it wasn’t long before I was called again – this time to see several pale insects under another section of bark: termites. I visited that old trunk at least five more times over the next half hour, as this one curious child discovered numerous species: ants, a weevil, a lady beetle, the hollow abdomen of a long-dead  beetle, and some unknown larvae working their way through the century-old sapwood.

Insects show up virtually everywhere at school. Inside, brown marmorated stinkbugs have slipped into corners, light fixtures, bookshelves. In the stream, we find aquatic larvae of dragonflies, crane flies, mayflies, fishflies, and stoneflies in the spring and adults in the fall when we return to school. 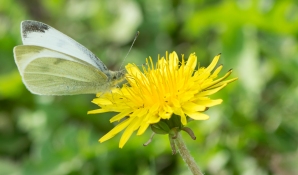 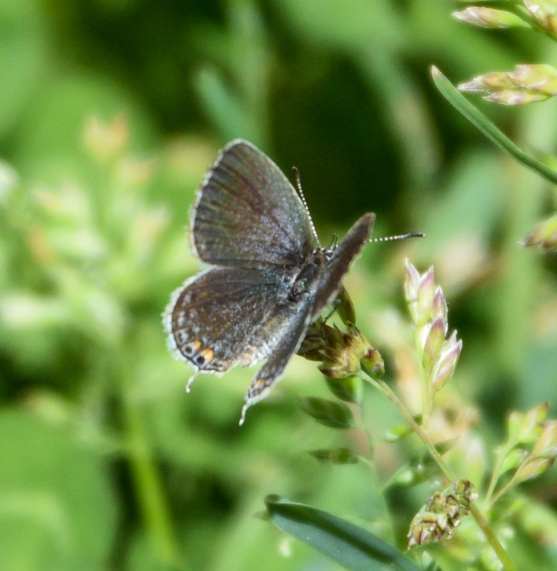 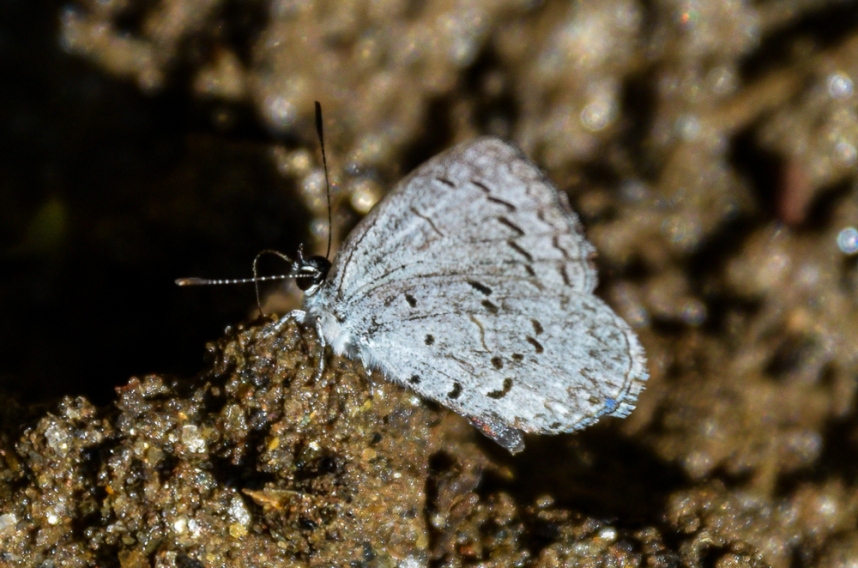 Of the 260 species (including plants, animals, and fungi) that the Maryland Biodiversity Project has recorded for our school site, 160 are insects. This high percentage of insects reflects, I believe, not only the general abundance of insects in an area with multiple conducive habitats, but also the growing awareness and appreciation that my students and I have for the amazing diversity of insect species. We now routinely document any and all sightings during regular searches while exploring and playing in the woods.

Every time we find a familiar insect, we reinforce what we know about its habitat and behavior. With each discovery of a new species in its particular niche, it feels as though we’re the visitors to a new planet meeting one more intriguing inhabitant. And on this planet, insects rule. 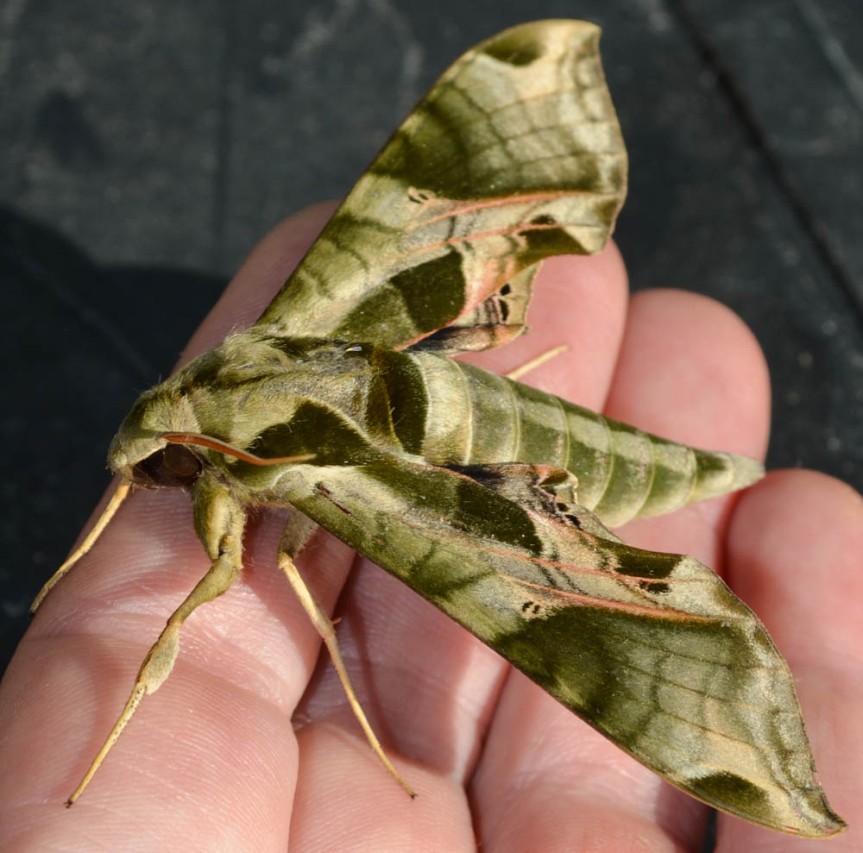