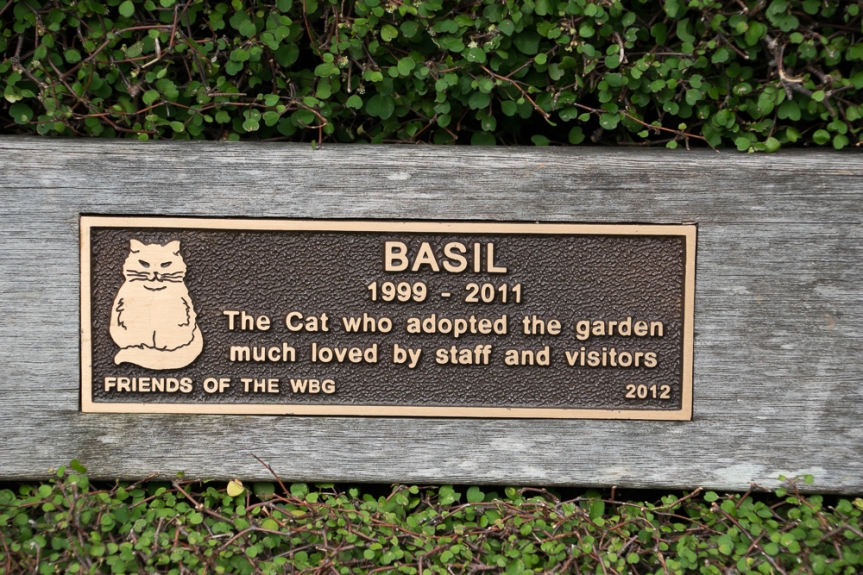 Kiwis love their cats – the human Kiwis do, that is. Kiwi birds, not so much.  Nearly half of all New Zealanders own cats; most of them have two. Cats rule the neighborhood streets and sidewalks of Wellington.  I’ve met probably a dozen cats within the Aro Valley area where I live.  These are the regulars who hang out on or under cars, perch on posts, prowl the shrubby banks, and follow us home looking for fish and chips. 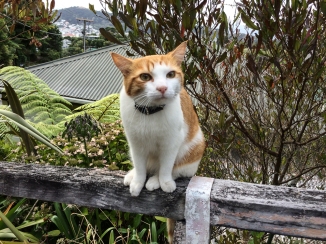 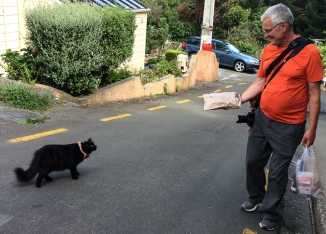 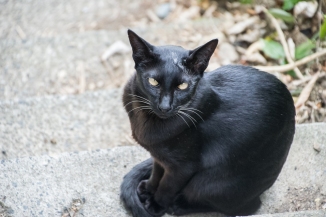 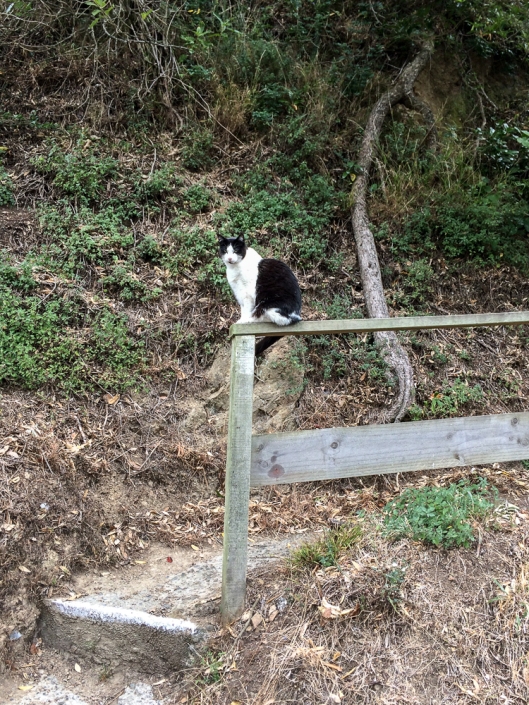 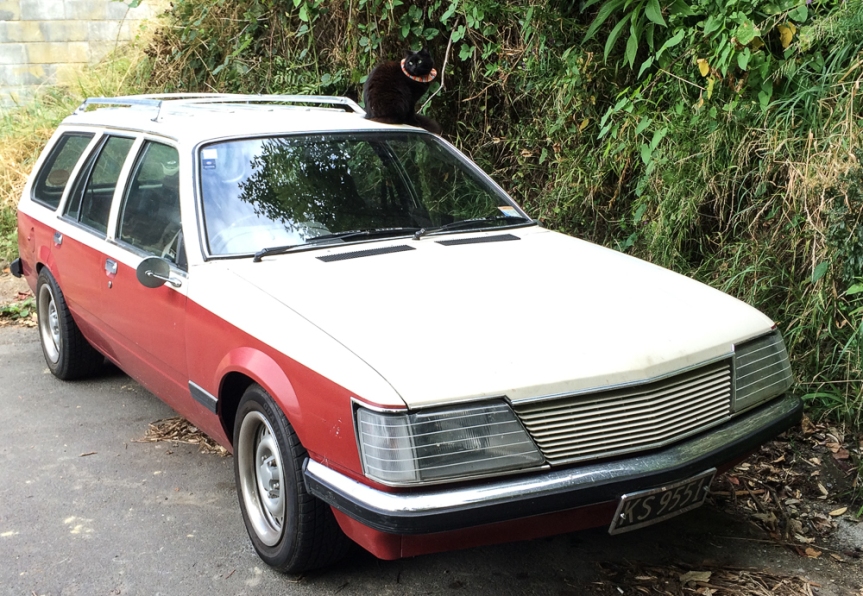 I only know the real name of one – Darwin – because he once wore a collar bearing that inscription, but being on ear-scratching or belly-rubbing terms with all of them, they now go by Daisy, Spot, Moo, etc.  They especially seem to love hanging out on the steep, secluded steps that wind throughout Wellington, giving them an excellent vantage point and me the opportunity to stop for a brief hello while I catch my breath.  Free-range cats have become my surrogate pets. 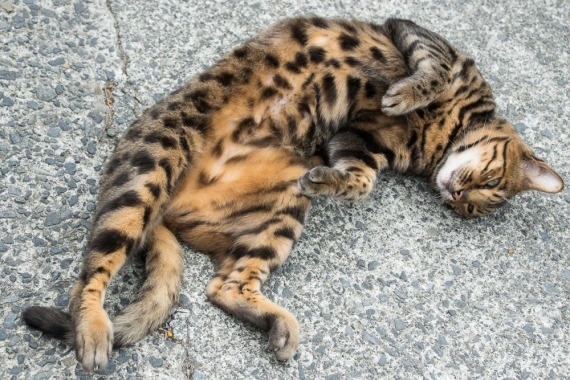 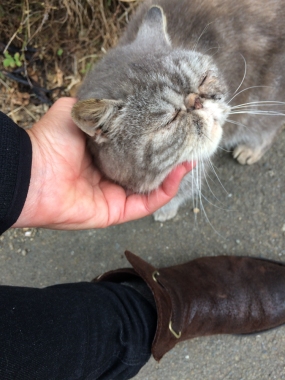 The theme of pets arose in the school program that I observed at the zoo last week: “Caring for ourselves and animals.”  A group of children entered the “Living Room,” the education center of the zoo, and the leader, Thom, immediately asked them which pets they had at home.  “Dogs?” Yes. “Cats?” Definitely.  “How do you care for your pets?” he asked. Feed them, take them for walks, play with them.  “Do you walk your dog on a leash?”  Some yes, some no.  “Do you bring your cat in at night?”  Puzzled expressions.  Thom gave a quick explanation of why the use of a leash for dogs and bringing cats in at night was caring behavior – not just for the pet, but for the animals that the pets might like to hunt. From here, he moved on to the habitats in the Living Room, and asked the kids to move around, explore the habitats, and see what evidence they could find in them for caring.  They were eager to see the various lizards and frogs, so Thom brought out the blue-tongue skink for the kids to touch, reminding them to use their “zoo finger”to stroke it very gently. 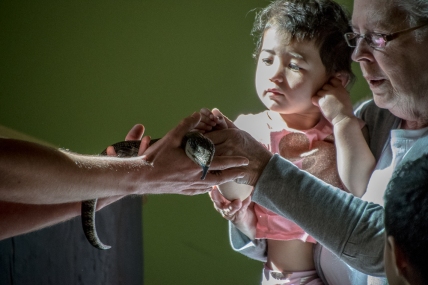 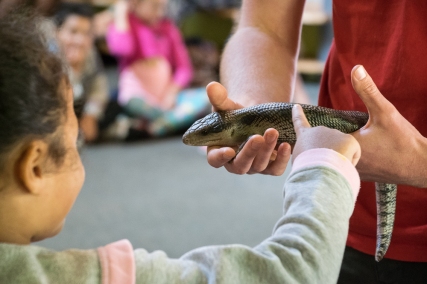 They admired the blue tongue that kept flicking out to taste their smell. When they gathered in a circle again, a child asked why there was no food in the habitats, prompting Thom to show that it was there in the form of fruit flies or vegetables hidden under a log that a reptile could excavate. “How do we keep them safe?” he asked. “By giving them walls so nothing can get them?” answered a child, uncertain. “By not letting them outside!” called another. This led to a discussion of the importance of keeping pets, including the captive animals at the zoo, safely in their habitats so they wouldn’t become problems for wild species.

Previously, I had asked Lynn, one of the education directors, how the zoo articulates its message of caring for other animals to young children.  How does it deliver an emphasis on conserving native species in the midst of so many exotic and introduced ones?  She acknowledged that this was a difficult task, but that beginning with caring for pets seemed to catch their attention and help them make a personal connection.  “And domestic cats?” I asked, knowing that these were identified here as one of the primary predators on native birds and reptiles, as they are worldwide.  The extinction of six endemic NZ bird species has been blamed on cats, with an entire species of wren on an island supposedly wiped out by a single cat belonging to a lighthouse keeper. “Bring them in at night” is an unwritten rule that the zoo promotes, as many vulnerable NZ animals are nocturnal.

Most people here would not countenance a full ban on outdoor cats, but Gareth Morgan, a well-known NZ economist and philanthropist, outraged many Kiwis by publishing a controversial statement: to protect native wildlife, NZ should be entirely cat-free, proposing harsh measures to make it that way – including euthanasia or not replacing one’s cat when it dies.  Most reputable scientific studies agree that feral cats remain a major threat and are most dangerous in conjunction with other unmanaged introduced pest species such as rats, possums, stoats, and hedgehogs (whose populations do not appear to be affected by feline predators). Measures such as poisons and traps have helped to control these, but cats on the loose remain a difficult issue worldwide. Australia’s small mammals are particularly susceptible to cat predation, and environment ministers there have issued a declaration of feral cats as pests. In addition, they acknowledged that work on threatened species recovery must consider best practices for keeping domestic cats.

Darwin showed up the other day wearing what looked like a clown collar. He did not seem particularly pleased with his new apparel, which I recognized as a “bird-safe” collar, designed to help birds see the cat before the cat saw them (bells are deemed only 50% effective, as birds respond to brightly colored visual cues more quickly than sounds). 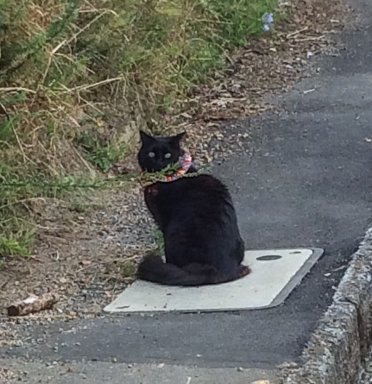 Darwin crossed the quiet street and strolled over to his usual spot on the sidewalk, where he sat staring at the weedy bank. He appears well cared for, receiving adequate food and exercise, not to mention my daily attention. Will he manage to catch an English sparrow, or a Norway rat?  Or maybe one of the tiny fantails that can’t seem to resist flying straight at an intruder?  This I will probably never know, but as a former cat owner (who has chosen not to replace him), my fondness for the Wellington street cats is tinged with the certainty that when cats roam, neither they nor other small creatures are ever truly safe.